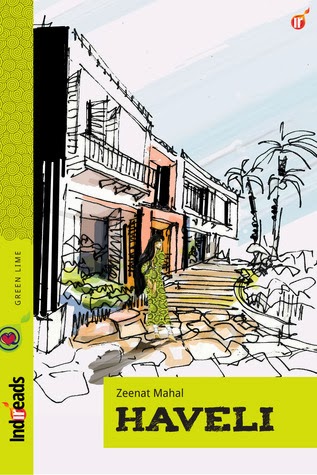 Name of the book : Haveli

The story starts with the relationship between Chandni and her grandmother, whom she lovingly calls –The Broad. This is enough to hook the readers till the end of the story. It's hilarious how the author brings out the  humor, as well as the conflicting emotion, between the granddaughter  and the grandmother.  Chandni is an orphan, whose mother had died while waiting for her husband to return.  She is brought up by her grandmother and turns out to be a saucy young woman.

Chandni calls her father The Nameless. She shares the same love and hate relationship with her father.  She wants her father to come and beg for forgiveness and declare his love for her. And he does come. But was his motives as pious as he led them to believe? Or does he have a hidden agenda?

While the father-daughter relationship is a part of the short story, there is another thread to this which is cute and full of hidden love and passion, the naughty love story between Chandni, [or shall I call her C?] and Taimur. Taimur is someone whom she hates because he could see through her acts. She herself couldn’t understand her true feelings for him until circumstances forces her to acknowledge what her heart desires? Will Taimur make the stubborn Chandni admit her love for him or will Chandni fall prey to her father’s schemes?

I loved the way a saucy woman introduces the readers to the Pakistani culture. Where as it should have been a history lesson, if not written properly, but Zeenat Mahal makes you see the culture and the backdrop of the story through Chandni’s eyes. Whether it is defying her grandmother with her dressing style or accepting the wedding proposal out of the duty of a daughter, all portray the social and cultural nuances of the Pakistani society. In such a short story [99 pages approx..] to bring out two upheavals in the life of the protagonist is commendable.

The chats between Taimur and Chandni could not help but make a reader smile. I loved the scene [Sorry Zeenat but I have to mention this]  where Chandni talks about knowing all about sex to Taimur and in the end he finds out where she got her lesson from. Hilarious.

The only problem I faced with this story is the number of pseudonyms given to the characters. The grandmother was The Board, Taimur was the Alpha Male, father was The Nameless and so on.  Even Chandni is  ‘C’. In such a short novella, with so many names flying by, makes it  a bit confusing. I won’t say that they did not add humor to the story but they did confuse me at certain parts.

Would I recommend this book to my readers? Most Definitely. In fact there are  many  threads which surround the Indian Pakistani culture. With such stories in every household of both the countries, maybe one day we won’t need to put on the television and hear about some border fights. Kudos for writing such stories.


Buy the Book at

Zeenat Mahal has published two romance novellas with Indireads. Two of her stories were published with The Missing Slate, in their June and September issues, 2013, writing as Faiqa Mansab. Her short story, The Accidental Fiancee was published in Running out of Ink in their August, 2013 issue. It was republished in November, 2013, in their Special Edition, Best of Anthology. Faiqa is currently doing her MFA in creative writing from Kingston University London.

Tete a Tete With Zeenat Mahal

1. How was Chandni born? Did she portray someone you knew or is she fragmant of your imagination?

Chandni is definetly her own person. Her protected lifestyle and religious constraints she often refers to are proof of that. This was deliberate because I wanted to show that a woman doesn't necessarily have to defy cultural and religious values to find romance and love, or to be independent. These aren't mutually exclusive. She has certain shades of perhaps some of my favourite heroines. Like Emma Woodhouse in Jane Austen's Emma, she grows immensely through the course of the novel and gains self-knowledge. Like 'Kairi bai' in The Far Pavilions, her eyes are a defining feature. She's also a bit like Kit Weston in Just Imagine, by Susan Elizabeth Phillips, one of my favourite romance writers.

2. Her relationship with her father was unusual. Do you think Chandni would have ever forgiven her father, if the story was taken in that direction.

3)You have jampacked a novella with many beautifully etched relationships. Many of them I am sure a reader would love to know further about? Do you think we will see a sequel?

I'll combine the answer to the next question and say that yes, a sequel is a possibility actually because there is a thread that I didn't explore regarding the father and the new wife. However that would be more of a short special edition kind of thing. After what her father does post the ending as you see it, I don't think she would forgive him ever. Her innocence and trust are lost. Her relationships with the rest of them change and evolve too and she comes out a stronger woman. Let's see if that ever sees the light of day.

4. How much of you was in Chandni? Not as a character but with reference to ideologies?

That's complicated. I'm a post-modern Muslim woman and I'm a feminist. Let's leave it at that.

5. The Nanowrimo month is going on. Many new writers are coming out of their shell. Any words of motivation for them?

First and foremost, never give up on your dream. Persevere. Read a great deal, and read about writing as well. I have added several of the books on writing I read, on my Goodreads author page. It helps. I started writing knowing that i was going to be a writer 'one day' when I was eleven. My first story was about a soldier's last moments. It got published in the newspaper I sent it to. I never stopped writing and spinning stories in my head. One of those stories was Haveli. It can happen. Dreams do come true; so dream on.

6. Any upcoming new ventures should your readers wait for?

Apart from Haveli and The Contract that are already published, a new novella of mine will be coming out soon. It's slightly darker, but it's still very much a romance novella and my initial readers have given positive reviews. I'm quite happy with it. It's called Thank you, he's for me.

7. If Chandni would not have found her true love, how would you have saved her from the situation.

It's a romance novella, there was no other story but this. Romance is a very demanding genre because you have to balance on a knife's edge, the story of a heroine who wants love, finds happiness only when she has her man, but at the same time, she must never appear to be helpless and needy because who wants to hear about that? We want to read about strong female characters who fall in love on their own terms and make it work. At least that's the kind I like, so I write such stories too.

8. Writers how have influenced you?

That is a long, long list. But since we're talking about Romance I'll just name the romance writers I love.  Victoria Holt's Gothic romances are truly wonderful and i used to devour her work as a teenager. I like Nora Roberts because she mixes the supernatural and romance with such expertise, and she writes in trilogies, always a plus with me. Josie Litton writes in the same vein and I loved the nine books she's written. Judith McNaught and Julia Quinn are absolutely wonderful with their heroes. And of course my absolute favourite Susan Elizabeth Phillips. She's amazing.

9. If Zeenat would not have been a writer then what would she have been?

You can meet her and see her work at the following sites.

She can be contacted at zeenatmahal@yahoo.com